The 828 series mixer went into production at the Alice factory in Windsor in 1976.  The last one was made there in 1986. The Mk3 was designed by Ted Fletcher in 2019 with production starting towards the end of 2020.

Please view the video below as Ted explains the history of the product and the making of the Mk3.

The original designers were Ted Fletcher, Eric Keene and Byron Davis, the technical directors of the Alice Company. The Mk3 is based on original design from 1976 together with 44 years of professional audio experience.

The input amplifier has a transformer input for both mic and line input, with switchable phantom power with indicator LED.The circuitry is discrete transistor working in pure class A. Inputs are XLR for mic input and standard balanced 1/4″ jack for line. 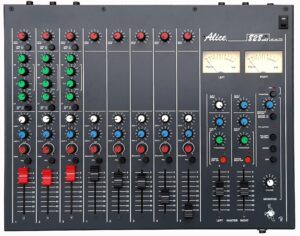 The mono channel equaliser is a discrete class A version of the Baxandall EQ circuit with an EQ in/out switch and LED indicator.  The mid frequency sweep covers 400Hz to 3.5KHz and the lift and cut is 14dB.

The channel fader is a 60mm ALPS precision fader driving a pair of aux controls (one pre and one post fader), a rotary pan control and a direct channel output which appears on the rear termination panel as a standard jack (unbalanced at nominal zero level).

A pair of standard jack connections on the termination panel drive each stereo channel. The input gain control handled levels above -20dB and a version with RIAA input from magnetic cartridge is available via RCA connectors if specified.

The stereo fader is a precision ALPS fader and the channel has aux sends and PFL (mono) as the mono channel. The input gain of the stereo channel is adjustable over a wide range to accommodate  all volume levels of inputs.

Mixing from the mono and stereo channels is passive, mixing to a pair of discrete transistor limiters of the classic 828 design.

Each limiter has an in/out button and an indicator LED to show activation. A further LED shows when the limiter is acting on the audio signal. Amount of limit action is set by threshold control.

Main output after the ALPS master faders, is via parallel integrated amplifiers and output transformers.

There are additional aux line inputs direct to the mix bus and line out amplifiers for the pre and post aux feeds from the channels.

Line outputs are via XLR connectors other outputs and inputs are by standard 1/4″ jacks.

All active circuitry in the signal path is discrete transistor using ‘through hole’ technology following the original circuitry of the Mk1, however, the monitor section has been converted to surface-mount technology.

Metering is by illuminated VU meters and PFL registers on both meters.

Unlike the original, the new Mk3 is mains powered via a switch-mode power supply operating from any mains voltage. This supply operates at very high efficiency producing almost no heat. (In fact, the lamps in the meter illumination consume the same amount of energy as the rest of the mixer!).

The 828 Mk3 technical performance is designed for, and is suitable for professional use in record production, broadcasting and communications.

The body of the mixer is made of 1.6mm steel, this provides a super-rugged framework for the electronics which are built on separate vertical printed circuit boards joined by removeable ribbon cable. Internal wiring is minimized by fitting all connectors to circuit boards.

The steel construction provides an efficient total magnetic screen to minimise any possibility of electrical or magnetic interference.